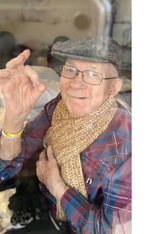 Stanley Lawrence Strehlo age 78 was born and raised on a farm near Baldwin, Wisconsin.
He was the 6th child in a family of 12. On the family farm, Stan learned life skills he used
the rest of his life…including his career as a heavy press operator.

Stan was a staunch defender of the unborn. He also loved his faith. Wherever he lived he tried to evangelize with others.

Stan will be sorely missed by many dear friends. He was preceded in death by his parents: Walter and Opal Strehlo and seven siblings.
He is survived by four siblings, three children: Jason Strehlo, Dana & Damien Beaber, and Patricia & Lyle Mlenek, two grandchildren: David & Angel Mlenek.

In lieu of flowers, Stan would appreciate donations made to St. Ann’s Academy or Prolife Across America. He would also appreciate Masses said for his soul.