We're sorry but the candle you have selected is currenty in the process of being purchased or has just recently been purchased.

Please feel free to select another candle or check back in 15 minutes to see if the candle you have selected has been released for purchase.

We're sorry but there are no candles available for lighting.

You have already begun a candle purchase session. If you would like to continue with your current candle choice please click "Continue" otherwise please click "Select Another".

In Memory of
Phyllis Ann
Riffe (Stegeberg)
1928 - 2018
Click above to light a memorial candle.

The lighting of a Memorial Candle not only provides a gesture of sympathy and support to the immediate family during their time of need but also provides the gift of extending the Book of Memories for future generations.

In the event that there is an error
in the information presented,
please contact the funeral
home by clicking here. 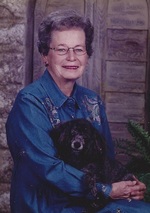 Phyllis was born on November 14, 1928 to Earl Martin Stegeberg and Marian Payne Stegeberg on a farm near Woonsocket, SD. Phyllis had two older sisters who were twins, Ila and Eleanor. Their mother died when Phyllis was only four years old.

She attended country school and then high school, graduating from Woonsocket High School in 1946. She attended Dakota Wesleyan University in Mitchell, SD where she met the love of her life, Robert E. Peterson. They married in 1950 and had two children, Kathleen and Scott. At the urging of her father, she ran for and won the office of Sanborn County Registrar of Deeds in 1954 and was repeatedly re-elected until her retirement in 1985. Sadly, Robert died much too soon in 1956, leaving Phyllis a 27 year old widow with a four year old and a two year old.

In 1977, she married George Riffe who filled her life with happiness, travel, new friends, laughter and love. They moved to Jamestown, ND in 1985 where she remained after George’s death in 1995 until 2012 when she moved in with her son, Scott, in Mahtomedi, MN and spent winter months with her daughter, Kathleen in Owatonna, MN.

Phyllis was a woman of small stature but one of the strongest women we’ve ever known. Her children remember growing up in a home where there was always a tub of ice cream in the freezer, popcorn on Saturday nights, vacations to visit family in Washington DC, and always many dogs and cats, becausePhyllis loved pets—indeed, she loved all animals ("Squirrels are people too!"). Many a person has said they hope to come back in their next life as one of Phyllis’ dogs, because they were pampered and always had a lap to sit on. There was not a dog alive that Phyllis did not love.

Phyllis was extraordinarily kind too. Although they lived modestly, Phyllis always had time for someone less fortunate than herself. The kids remember going with her on Christmas Eve to deliver plates of cookies to people in town who had even less than they did. She was kind to and accepted all people, since God made them all. She never had a harsh word for anyone.

Phyllis was a lifelong Democrat. She often said that she, her father and her sisters might not have survived the Depression if it had not been for FDR. She was interested and active in politics all her life.

Perhaps because Phyllis had so much loss in her life, she was very sentimental and saved everything. And we mean everything, down to the smallest handwritten note from her first husband when they were only dating. Family meant everything to her, so she honored her family by talking about them, taking thousands of photos, and never letting anyone forget their story. For instance, just two months after Robert died, she typed out his life story “as I know it” so her children would know their father. She also attached small notes to the back of keepsakes noting “this was from Grandma Young” or “your Uncle Charles made this in 1981.”

Diagnosed in 2012, Phyllis said if she’d known she was going to have Alzheimer’s, she wouldn’t have taken such good care of herself. She died while under the loving care of the staff (first floor) at Coventry Senior Living in Mahtomedi. The family cannot express enough how grateful they are for the care given to her by the staff, and the care given Phyllis’ family at the end.

Phyllis will be laid to rest next to Robert E. Peterson at Eventide Cemetery in Woonsocket, SD.

This Book of Memories brings those affected by loss together by encouraging communication and self-expression. By giving friends and family a special place to tell their stories and express their feelings of loss, it helps them care for one another during a very difficult time. Click on any of the links to the right to access features or information within this memorial website.