To share your memory on the wall of Alice Bloomquist, sign in using one of the following options:

Alice was born to the late Henry and Ellen Swanson and lived on a farm in Swanville, MN (Morrison County). She was the 8th of 10 children. She attended a one room school house, District 79 in Swanville, MN and graduated from Swanville High School in 1944. After graduation she moved to St. Paul to live with her sister Clara, while Clara’s husband served in WWII. Alice and Clara worked at the defense plant in St. Paul until the war ended. She then worked at Montgomery Wards for 84 cents an hour and then at Brown and Bigelow on the assembly line making calendars and playing cards. She met her husband Floyd Bloomquist in 1946 in St. Paul and got married June 12, 1948. They moved into a small cottage in White Bear Lake near Floyd’s parents, Al and Nettie. When that lease was up, they moved to St. Paul into a number of different places. However Floyd wanted to move back to White Bear Lake that he loved so much and they built a house on a ¾ acre lot across from his parents in 1951. Diane was born September 17, 1951 and moved into that new home when she was a month old. Alice remained a stay at home mom and had Paul on March 14th 1954. He had Downs Syndrome and he never walked or talked. They had to move him in to a home for further care and he died at the age of 14. Deb was born on December 31, 1955, and Darryl was born February 10, 1960. Alice raised her children and then went back to work at European Health Spa from 1973- 1982. She would open up the spa in the morning, maintain the pools and sold bathing suits. She loved this job and was so proud of it. Floyd was a partner in the wholesale flower business with Al and Nettie and also worked as a carpenter until he retired. Alice and Floyd loved having their two granddaughters, Jennifer and Heather, live across the street and they would come over in the mornings until it was time for school. Alice would leave them cookies in their mailbox so when they came home from school they would have a treat. Alice really took on the role of caregiver herself when her mother-in-law Nettie got cancer in 1986 and moved in with them until she died. She also took care of her daughter Diane when she got cancer in 1995 until her death. Her final caregiving was for Floyd when he got sick with emphysema and she took care of him until he died on June 8, 2004. He was buried on June 12, 2004 which was their 56th wedding anniversary. Alice enjoyed flower and vegetable gardening, cooking, baking, reading and cutting out many articles out of the paper. She was very in to politics as a passionate Democrat and loved to discuss it with others. She always kept up on current events.

Alice developed macular degeneration in 2009 and was very sad to lose the ability to drive and in the same year broke her ankle. She then became home bound and in March of 2016 after her 90th birthday, Darryl and Deanna moved in to take care of her. In January of 2017 she fell and broke her hip and became more dependent and in need of more care. She spent her last years listening to talk radio on WCCO AM every day and enjoying many phone calls from friends and family. She enjoyed her phone calls from her only remaining sister Loretta who kept her up

to date on family matters and current events. Alice was a long-time member of Redeemer Lutheran Church since it opened in 1956. She loved the cards, phone calls, and visits from friends and pastors who would come and visit and give her communion. She was so happy that her church family never forgot about her and we will be forever grateful.

Alice loved her family and was proud to become a great grandmother four times and loved their visits and the family gatherings. Alice also appreciated her weekly visits from her home health aide, Madina for the last 3.5 years, who really became a part of our family. Alice was forever grateful to be able to remain in her home until her last day by receiving care from so many of her family and friends. We are grateful for Fairview Lakes Hospice and their compassionate and professional services they provided.

Alice left a legacy to her family of long and enduring relationships, compassion and caring for others and a belief that we are stronger together. We will miss her.

A private family service was held on Friday, November 6, 2020 at Redeemer Lutheran Church with the interment held at Evergreen Memorial Gardens. We will be having a celebration of life in the summer of 2021 where family and friends can join us.
Read Less

To send flowers to the family or plant a tree in memory of Alice Marcella Bloomquist (Swanson), please visit our Heartfelt Sympathies Store.

We encourage you to share your most beloved memories of Alice here, so that the family and other loved ones can always see it. You can upload cherished photographs, or share your favorite stories, and can even comment on those shared by others. 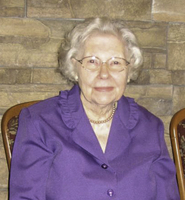