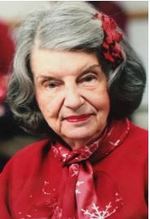 Ruth was born on Dec. 31, 1928 in St. Paul to Clifford and Mildred (Kruse) Richardson. She was the first of three children. She grew up on a farm in South Washington County where she attended grade school in the District 46 schoolhouse later graduating in 1949 from the University of Minnesota School of Agriculture where she participated in Chorus, Swimming, Archery, YWCA, Youth Club and the Gopher Literary Group. After graduation Ruth began working at the Mounds Park Hospital where she was born and later employed by the Minnesota Mining Co. In 1961 Ruth married Air Force Veteran and IBM Operator Robert Golda and settled into a new home in Oakdale where they raised their two children. Ruth loved to sew as she spent countless hours doing what she loved. As a young woman Ruth made a lot of her own clothing including designing and making her own wedding gown. As a youth she was a member of 4H, later a group leader for several years. Ruth spent much of her adult life volunteering for many community programs. She was a member of the North St. Paul American Legion Post where she served as president.

Ruth was preceded in death by her husband Robert Golda and parents Clifford and Mildred of Rush City; brothers Glenn Richardson of Rush City and Donald Richardson of Tucson, AZ. She is survived by son Donald (Jodi) of White Bear Twp and Daughter Karyn (Steven) Berg of Forest Lake; grandsons Joshua, Matthew and Reid Golda; and granddaughters Kalley and Ashley Berg; numerous nieces and nephews. Ruth was dearly loved by her family and will be greatly missed.