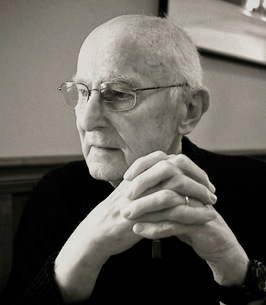 John Emanuel Povolny, 95, died on November 11, 2022. John was a remarkable and humble man who grew up in a Bohemian neighborhood just off W 7th Street in St Paul, with his parents Emil and Molly and his siblings Margaret, Jim and Mary Jane. They lived in a series of rental properties, moving every few years, always within 2 blocks of his aunts and grandparents. His main memory of those rickety homes was that the wood stoves always went from making the one heated room go from too cold to too hot without ever being just right. John would own his first home at age 22. It was brand new as were the other 4 homes he would design and own. His parents never owned or drove a car. He would own several dozen cars over time, each new, each with maximum horsepower.

You need a scorecard to figure out John’s education. Done with grade school at St Stanislaus two years early, out of high school and done with two years at St Thomas University (UST) at age 17, he enlisted in the Navy on his 18th birthday in January,1945. He was on a ship in the Pacific when the war ended. He finished his Chemistry degree in 1947 after talking his Navy CO into an early discharge. As you can see, John was always in a hurry. He also really knew how to hold a job. He skipped graduation from UST at age 20 to interview at 3M as a chemist. He left 38 years later as a Divisional Vice President. The next day, he went over to UST to volunteer in the creation of a new Engineering program. He left 30 years later as the Associate Director of Graduate Engineering. He was 88 years old. Pretty good for a guy who never took an Engineering class. He simply knew how to lead and was always able to adapt and thrive in a UST unrecognizable from that of 1947. He was particularly proud of encouraging female engineering students, including 3,000 6th graders he introduced to Engineering through a summer program at UST. He succeeded because of his work ethic, his integrity and a belief that he could do anything if he was given a chance. He taught his children and his graduate students the same lessons.

Done with school and the Navy, he was eager to have a family. Being the kind of loyal son who called his mother every morning of his adult life, it is no surprise that she had recruited him to hand out bingo cards at Tuesday night bingo in St Stans’ basement. One player, Shirley Brower, was charmed by his card handing out skills and accepted his invitation to a hot date - Wednesday night Novena. A smooth move it turned out to be as they would spend 44 years of married life together before her early death in 1993. Others may have won the meat prize for bingo that night, but John would take home the true gem. They would have 4 children in the next 5 years and fulfill the hopes they both shared over their ensuing life together.  John remarried Joyce Paulson in 2006, who brought much happiness to him in his later years. Age would force John to retreat to a smaller world. In time, his flesh reached for the earth. That is where it now belongs. His essence lives on.

John is survived by his wife, Joyce, his sister, Mary Jane Gaffney, his four children, Greg (Kathy) Povolny, Kate (Ted) Chin, John (Frances) Povolny and Tom (Sheila) Malone-Povolny, 13 grandchildren and 11 great grandchildren, many other relatives and friends too numerous to list.  The family thanks The Lakes at Stillwater and Brighton Hospice for their loving care of John during his final days.

Funeral services for John will be 11:00 a.m., Thursday, November 17, 2022, at St. Jude of the Lake Catholic Church, 700 Mahtomedi Avenue, Mahtomedi, Minnesota.  Visitation will be from 10:15 a.m. until the 11:00 a.m. funeral Mass at the Church on Thursday.  Interment will be at Resurrection Cemetery in Mendota Heights, Minnesota.  Memorials are preferred in lieu of flowers to the John E. Povolny Endowed School of Engineering Scholarship Fund at the University of St. Thomas.